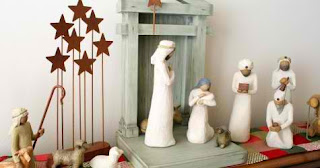 Soon our 2012 Christmas journey will end as we push ourselves toward December 25th.  All the labor and expense will climates as we unwraps the presents we probably spent too much on.  Days of food preperation will be eaten in about 20 minutes.  Most will proclaim, "will not do this next year, we will go out to eat and not spend so much money.   Sometimes there is kind of a let down after the hoopla is gone out of Christmas.   Very few have a Norman Rockwell kind of Christmas.

As a child Christmas was no different then any other time except we did get invited to all the organization Christmas parties for the poor kids.  But in our home nothing changed, Dad still got drunk and usually I would have to go running to our neighbor to call the police.  My brothers and I have talked about our memories...they pretty well line up...Christmas was harder because we always expected it to be different.  But it's part of my journey.

Now about the journey Mary and Joseph took to his ancestrial home to pay taxes of all things.  It was a long painful ride I am sure on the donkey and a long walk for Jospeh.  There are two routes they could have taken, each about 92 miles.  Normal walking is about 3 miles per hour. Probably about five days on the road.  The journey had to be hard for anyone but especially for a pregnant woman about to give birth.   The last leg would have been the hardest though since Bethlehem was in the hills.  From Jericho's desert to Bethlehem is an uphill hike of 3,500 ft.   How anxious Joseph must have been to find a comfortable room.  In the midst of the hardship that went with Mary and Joseph’s journey and amid the deferred dreams and dashed hopes, God was working to redeem the world.

This was not a journey Mary wanted to take. It was not the way she imagined it would be. And of course this was not to be the last of Mary’s unwanted journeys. A short time after Jesus’ birth, Herod would try to kill the child, and she and Joseph would take the infant Jesus and flee to Egypt as refugees. Thirty-three years later, there would be another journey she would take with her son, this time down the Via Dolorosa as she followed him to Calvary. 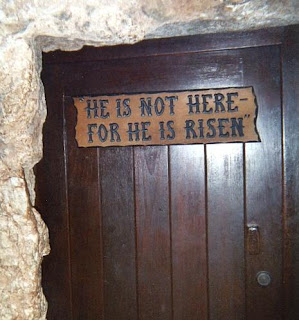 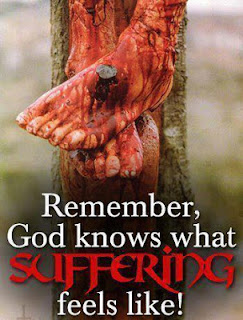 Oh I   know it's hard to look at this picture on the right just a few days before Christmas. We would rather see sweet baby in a manger surrounded by wise men, shepherds from the fields, a star shinning bright and angels singing.  The Heavenly Father and Jesus knew this was coming, this was where the journey would end and ours could begin.  He had to die, He had to shed HIs blood, He had take all the sins of the world upon Him for us to even have a heavenly journey.   He had to rise from the dead to give the gift of eternal life.
On a trip to Isreal I  stood outside the toomb staring at those words on the door put there by the organization who runs the Garden Toomb.   This was my favorite part of our trip to Israel.   I was convinced this was the place, outside the city walls, largest garden near Jeruselem, history tell us it was a rich man toomb and you can walk upon a plateform and see the skull, exactly the way its written in the Scriptures.  Everything seem to fit yet it was this words on the door to the toomb that captured my heart  and tears poured out of my eyes.  I remember thinking, God I could stay here forever, it's so peaceful.   But my journey was not complete, God had more for me to do and it was not to sit in the safety of the garden.  Out side the garden there were people seeking to find age old answers to why there was a void in their life. Outside the garden there was a battle going on for the souls of men and women.
Jesus walked all those miles for us, got His feet dirty, touched the lame, the sick, the demon porcesssed, most of all the blood that dripped from His broken body is the blood He placed on the mercy seat for us.  Because of His journey I can walk this earthly journey with peace knowing at the end someone will someday stand at my grave site and say, she not here, only her shell,  she has risen to be with the Father and the Son.  My earthly journey will be over and then begins the heavenly one.
Last night we met with a young couple home whose journey has taken them to Indonesia and now home for a few months then back across the sea they will go.  Their heart is to reach a group of people who need to hear the gospel, translate the Bible in their language and then give them the story of God journey to redeem them.  Their journey so far has reaped some good things but not without trials and suffering.  You see the enemy...satan himself journeys also, he walks like a roaring lion on this earth seeking to discouraging anyone giving out the gospel anywhere.   Just as he tried to stamp out Jesus on His journey and couldn't , he now turns to the followers of Jesus.  If there has ever been a time when we needed to stand up for the gospel journey, it's today.
There is no let down to the real Christmas story of God sending His Son to be born of a virgin, grew in favor with Him and man...then journey the cruelness of Calvary Road to the cross where He willingly gives up His live...only to rise again bringing hope for our journey.
Have a Merry Christmas Journey.
Posted by Wise Hearted at 9:53 AM 13 comments:

CHRISTMAS IN THE JUNGLE