God waste nothing....not even our sin. 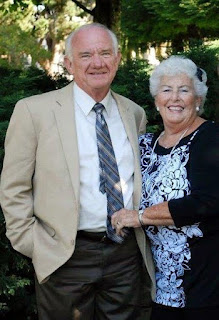 They said it would never last when we got  married at 17 on Oct. 20th,  54 years ago. Guess we showed them, whoever them is.


A few weeks ago we were sitting on
a bench outside a Mexican restaurant waiting for our friend to come out. A couple approached us and ask us how long had we been married.? We said, 54 years. They went on to ask, how have you stayed married so long?  I (Betty) answered, "being

committed to our marriage". Ace replied,  "being willing to forgive". Had that been just head words and not heart words I am pretty sure our marriage would not
have lasted because there were certainly some rough years.


In talking to this couple we found out they were only married a year and already struggling.

Lets see, our first year Ace was gone a lot due to his job, he worked on a rig in the oil field so I was alone most of the time.   We moved twice, I had two miscarriages.   The next 12 years that followed were some of our worst, full of insecurity, loneliness, changing jobs, moving to another state, more miscarriages, adultery, several separation, drinking, searching for answers, retaliation, more moves, lots of tears, lots of hurt.

During that time, at 26 Ace had a massive heart attack.  After a month in the hospital the doctors told him to take a medical retirement from his job, he should not lift over 20 pounds, or push a lawn mower.  The heart attack had left a fourth of his heart useless.  At that time, 1973, they were experimented with bypass surgery and after much discussion they decided to try it on Ace, it worked and he went back to work a few months later.  That bypass along with five stints keep his heart working.

This major event was the catalyst that turned our lives around for he was a believer since age 13 but did not grow in his knowledge of God.  While in the hospital a women stopped by from a church and ask him, sir what can I do for you? He replied, I just need to get right with God.  She said, I'll send someone to talk to you, no one came.  But, from that point on we started the process of cleaning our lives up.

Not only did Ace have a scar on his heart from the attack there were emotional wounds from the past that God wanted him to deal with.

Having our first child after all those years was the next catalyst for a life change.  I begin to read the bible, searching for how to fill that hole up in my heart that the American dream did not fill up.  God was dealing with His prodigal son at the same time.

In 1980 due to a diligent church pursuing us I got saved and Ace rededicated his life to the Lord.  For the first time he knew and understood the  scripture I John 1:9.  From that point on it was perfect...you do know I just lied there.  Of course it was not perfect, but for the first time things begin to have meaning , our past, our future, our present, our failures, our mistakes, our sin even.  Seeing all  through the eyes of God perspective gave peace, contentment and joy but did not stop the struggles.  I am totally convinced without pain one cannot grow, mature, or for that matter cannot live out the truth of the Bible with conviction and boldness.  Rick  Warren says: "We are products of our past, but we don't have to be prisoners of it. "   God wanted us to walk in freedom despite our past.

God was going to test that truth.  In our 40's we were challenged to go into overseas mission with New Tribes Mission.  Huge step of faith, one we have never ever regretted.

Several years into our mission life one of those past mistakes came crashing  in on us.   God had impressed upon Ace heart years before someday he would have to deal with it.

From those 12 bad years of our marriage came an email from  a young man who was looking for his father.  He ask  if Ace would be willing to do a DNA test.    So sitting in Papua New Guinea, half away around world we made one of those profound decisions that changed our lives again.

Ace was totally honest with me and I was crushed but not surprised.  We both felt strongly that the request for Ace to take a DNA test was the only way to help this man know truth.  I found myself sitting up at night crying over stupid thoughts put there by the enemy of my soul.  Ace was in his own torment of guilt which knows no time limit.  40 years had passed since those bad years.

There are tons of details, but the most important thing I need to share is:  yes, Ace is  the father of a son born from another women.   Knowing that set off a series of events, the first being bringing our two children together and sharing this with them, which was not easy since we lived on the other side of the world but we knew it was important to be face to face with them instead of telling this by email.    It was a precious time  because through this we became more real, especially to our son.  By the time they were born we were walking with the Lord so they never knew us as worldly parents.  Our past did not diminish their love for us one tiny bit.

And, during all this, Ace says he never felt the love of God  as strongly as he did then.

We have formed a deep relationship with Ace son and family who are believers. Everyone in our family has met him and his family.  It would take writing a whole book to put all the details of the hand of God in this. God has used this in our lives, and in others in the area of forgiveness. Remember He waste nothing.

As I read back through what I have written I want to add and add lessons we learned through our 54 years.  One that rises to the top is this, yes, couples need to be committed to each other. Yes, couples need to forgive each other,  but first individually they must at all cost be committed to Him, the keeper of their soul, and forgive themselves.   We get disappointed in each other, in ourselves, in the world but we have no reason to be disappointed in Him. I am reading a book titled, A Quest For More by Paul Tripp....Living for something bigger than you.  That's it!!!!   That is where we must come to every day, living for something bigger than ourselves, then and only then can our messy lives impact others and bring glory to God.

I have Ace permission to write this post.  That part of our married life no longer holds us captive.  We set it free for God to be used as He pleases, which is why I decided to write a little about it.  God prompts us often to tell some of our story in order to help someone trapped in their past. The truth sets us free.


Committed to each other and forgiving each other can help in the worst times which will make for some good times to remember.  Happy Anniversary to us...

Posted by Wise Hearted at 7:00 PM No comments: