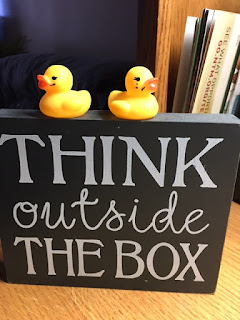 These two little ducks sit on my desk  as reminders of an
important truth God continues to teach  me.  I've use them as an illustration in ladies meetings as I tell the story of the Yuck and Yea ducks.

Notice the faces of the ducks, one has tears dripping from it's eyes, a drooping mouth, that the yuck duck. The other one has smile lines coming from it's beak and no tears, he is the yea duck.


Here is the story of these little ducks, yuck and yea.  They ALWAYS swim together, ALWAYS.  Often we acknowledge yuck duck and forget the yea is there because our struggles keep us from seeing the yea's in our trial. Let me give you a for instant that happened to me recently. \

Last time I posted I mentioned I was having chest pain and  trouble breathing upon exertion.  Tests  revealed there was blockage in the two main arteries of my heart.  I ask, actually I begged  God that  stints could be used to open the blockage  but to my dismay there was too much blockage, I needed by pass surgery.

The yuck duck seem to be swimming all by itself at that point.  Even though I needed bypasses the doctors said I had a strong heart and should do well, awe...there was the yea.  I begin to thank Him for the good doctor I had  who pushed me into going to the ER so I would see a Cardiologist  quickly.  There was that yea duck swimming right along side yuck, heart surgery is a yuck, great doctors are the yea.

God provided for our daughter in Minnesota to come and be with  me through the whole ordeal.  I think my husband needed her there as much as I did. The doctors were able to do bypasses on the two major arteries but there was a third one block at the back of my heart, it could not be bypassed.  There they are again, yuck and yea, swimming together.

Everything was going well, four days after surgery they removed one of the two tubes. The other one continued to pour out a lot of fluid, too much actually, something was wrong.  My goodness, the yuck duck seems to be swimming alone again.  It seems during the surgery in the moving of my heart a tear happened in the Thoracic  area  behind my heart.  It's the part of the body that our fat flow through.  There was no way they could remove that tube because the fluid would build up around my heart and weaken it,, more yuck.  Surgery was an option but the very  last one, very risky.  Here is when the yea begin to show itself.  If I could maintain an almost no fat diet along with some shots it would hopefully heal on its own. Of course that meant staying in the hospital with the blasted tube still in me.  Yuck again

By this time our daughter had to go back home and Ace became my constant companion staying every night with me.  All the nurses made comments how blessed I was to have such caring people in my life, yea and  yuck duck.  During my 19 days in the hospital I met many nurses but a couple were truly  yea ducks.  One in particular, we called her Memphis since I could not pronounce her  name and  she was from there.  She was a strong believer who spoke His words every time she was in my room.   Even when she was not my nurse she would check in on me, the bonds of Jesus are strong.    Another was a young women whose parents were missionaries in Japan, she grew up there so we were knitted together by a common understanding.  Ace and I plan on getting with her and her husband, doing some member care ministry as soon as I can travel.

A side note,  I had my 70th birthday while in the hospital.  The yea is I have lived a full 70 years and the yuck, no birthday cake on my diet.

Believe it or not, one can survive with little fat and not be hungry. I could have  no more than five grams of fat a day for the Thoracic  system to shut down and heal itself.  Now any of you who have been in the hospital know the food is a yuck duck.  But there were some yea too, corn flakes and skim milk for every breakfast tasted wonderful. And they made a tasty vegetarian vegetable soup along  with six crackers which became my  lunch and supper every day, I lost 12 pounds.  Now that is the biggest yea.

By now you are sick of the details of my trial but to not tell the details would not be giving the yuck and yea duck their due.

Anybody reading this can attest to their own yuck and yea ducks.  Maybe right now all you can see is the yuck in your life but God promises you there is a yea for He is always with you and that is our biggest yea.

John 16:33 “I have told you these things, so that in me you may have peace. In this world you will have trouble. But take heart! I have overcome the world.”

P.S. It was an over whelming amount of people who send well wishes and prayers. Since being home I have finally been able to read them all on facebook and emails.    How I wish I could hug all of you but a huge THANK YOU will have to do.
Posted by Wise Hearted at 10:18 AM No comments: Praising God when we do not feel like praising Him is called a “sacrifice of praise”. Hebrews 13:15 says, “By him therefore let us offer the sacrifice of praise to God continually, that is, the fruit of our lips giving thanks to his name.


Despite all my medical issue this past year and a few other trials  I am choosing to praise His name as I end 2016.   It would be so easy to just choose to lose weight, keep my temper in check, save more money, give more, be kinder, pray more and God knows I need to work on all those issue and a few I did not name.   But I am going to choose to praise His name in 2017 no matter what comes and even when I fail.  The knowledge I have of my relationship with Him does not rest on what I do or don't do. It rest in what He has done for me and His love for me which does not come because of who I am but who He is. It is on this truth I can give a sacrifice of praise.


Footnote since I post the above:
For months now I have been experiencing chest pain and loss of breathe even doing normal house hold chose. It has gotten worst, finally went to doctor and she said I had classic angina symptoms. Had a Nuclear stress yesterday which reveal an abnormality in my heart. Waiting for an appointment to have a heart cath test which will reveal either blockage or a valve issue, or etc. I am praying it is something they can fix without open heart surgery such as stints. All that to say, I do have peace about whatever has to happen. The only person who could take my peace is me through worry that my God is not in control. I do covet your prayers.