A little history:When Rome destroyed the Second Temple in 70 C.E., only one outer wall remained standing. The  probably would have destroyed that wall as well, but it must have seemed too insignificant to them; it was not even part of the Temple itself, just an outer wall surrounding the Temple Mount. For the Jews, however, this remnant of what was the most sacred building in the Jewish world quickly became the holiest spot in Jewish life. Throughout the centuries Jews from throughout the world made the difficult pilgrimage to Palestine, and immediately headed for the Kotel ha-Ma'aravi (the Western Wall) to thank God. The prayers offered at the Kotel were so heartfelt that gentiles began calling the site the “Wailing Wall.” This undignified name never won a wide following among traditional Jews; the term “Wailing Wall” is not used in Hebrew.

Watching the news today, seeing our president walk up to the wailing wall in Jerusalem made my heart yearned to be right there.  Oh, I don't mean with the president but there at the wall.  There is a pull to go back once you have been to see the Holy Land, especially Jerusalem.  Like most visitors you write your prayer request on a little piece of paper and tuck it into the cracks of the wall, women on their side, men on theirs.

Two of my fellow bloggers wrote on music today, Floyd theregoi.com:  and Bill grandi.ovcf.org/wordpress/ , so thought I would add my two cents of music to theirs.   This Gaither video was filmed at the    Tower of David inside the old city of Jerusalem.

John sees a glimpse of it in his vision: “The Holy City, the new Jerusalem, coming down out of heaven from God, prepared as a bride beautifully dressed for her husband” (Revelation 21:2). This is the city that Abraham looked for in faith (Hebrews 11:10). It is the place where God will dwell with His people forever (Revelation 21:3). Inhabitants of this celestial city will have all tears wiped away (Revelation 21:4).The New Jerusalem will be fantastically huge. John records that the city is nearly 1,400 miles long, and it is as wide and as high as it is long—a perfect cube (Revelation 21:15–17). The city will also be dazzling in every way. It is lighted by the glory of God (verse 23). Its twelve foundations, bearing the names of the twelve apostles, are “decorated with every kind of precious stone” (verse 19). It has twelve gates, each a single pearl, bearing the names of the twelve tribes of Israel (verses 12 and 21). The street will be made of pure gold (verse 21).The New Jerusalem will be a place of unimagined blessing. The curse of the old earth will be gone (Revelation 22:3). In the city are the tree of life “for the healing of the nations” and the river of life (verses 1–2). It is the place that Paul spoke of: “In the coming ages [God] might show the incomparable riches of his grace, expressed in his kindness to us in Christ Jesus” (Ephesians 2:6). The New Jerusalem is the ultimate fulfillment of all God’s promises. The New Jerusalem is God’s goodness made fully manifest.Who are the residents of the New Jerusalem? The Father and the Lamb are there (Revelation 21:22). Angels are at the gates (verse 12). But the city will be filled with God’s redeemed children

The  pastor who I was saved under use to say, if you want to know what God is doing, watch the land, Israel and watch the clan, the Jewish people.  It may seem like it's all about our president and Israel but God wants us to see beyond the wailing wall to His Son returning and the coming of the New Jerusalem.

Posted by Wise Hearted at 9:13 PM No comments: 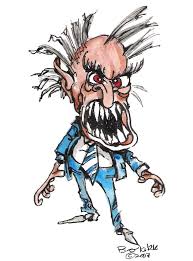 Ever been around someone you knew it would take very little for them to explode?   You try to walk around subjects that might trigger an outburst such as politics, family issues, cultural differences, preachers, you name it and that person who is a walking time bomb can be set off by just about anything. You feel like you are walking on egg shells trying not to anger them. You feel  your  body tense up when a subject has come up you know will set them off.

Almost impossible to really enjoy being around them isn't it? They can make family reunions a nightmare.

I know about anger first hand.  Alcohol and anger was what ruled our home as I was growing up. My Dad was not one of those lovable drunks.   I knew little about my Dad's family except his brother and being around him told me he suffered with the same anger. Also learned their Dad had a drinking issue along with anger.   Sound like something we can pass on to others, doesn't it?

Anger is the fruit of rotten roots. One of the primary roots of anger stems from the family. Angry people come from angry families because they learn from their role models and carry on the same behavior in their own lives, eventually passing it on to their children.  Since I cannot change my family roots I have a choice to be like them or try something different.

It does not take long to realize an angry person has got some deeper issue going on inside them.  The emotional pain drives them to an outburst and leaves you wondering, what did I say or do to trigger that?  You work hard at staying out of their way.

There is nothing I dislike about myself more then my temper. It was the sin that so easily besets me and I would justify it by how I was raised.   Angry people begat angry people, right?  That kind of rationalization worked when I did not have the Holy Spirit living inside of me.  When I faced my anger and decided to deal with it God's way I found I could over come it.  God brought stability into my heart and taught me how to walk in the Spirit and the power of forgiveness.   Not only those who hurt me but for myself when I failed to exercise self control a fruit of the Spirit.

My heart was prompted to write on this because just a few weeks ago I was at a mini family reunion with my brothers.  We had not been together since our mother had died.  There was a small dread in me about the re-union because one of my brothers  is a walking time bomb, full of pain and anger.  Our father was  very cruel to our Mom and  us three kids, but more so toward this brother.  He (my brother) always had a short temper and it got shorter as he grew and he turned to unhealthy ways of dealing with it which caused him to end up in a reform school then a year in prison.   Most everyone who meets him knows within a few minutes he is an angry man.  From the few times he would talk to me about it, it was clear he had never forgiven our Dad who has been dead for years. I told him he was enslaved to a man whose body rots in the grave one time during a confrontation  we had.  He would not give God a chance to help him over come this anger.

There is no one I pray for more then this brother, Larry,  and would ask you to pray for him too.  And I have seen a softening in him the last couple years.   I want him to understand Ephesians 6:12 That he wrestle not against flesh and blood but against principalities, against powers, against the rulers of the darkness of this world, against spiritual wickedness in high places.  I want him to know  freedom from this anger. Every time I am around him I see how easily I could be just where he is, it's a choice.  I chose to be a freedom walker.

What are you walking in today, anger or freedom?
Posted by Wise Hearted at 2:33 PM No comments: