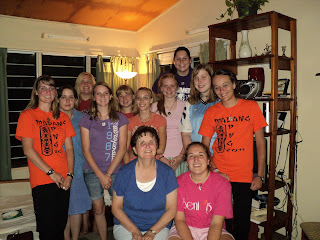 Laughter filled my living room as this group of young women with their leader begin to tell one story after another about chasing the geckeo that inhabited the houses here in Papua New Guinea.  One girl said, where are the  cute talking green gecko, you know the ones that stand up with it's elbow prop on something giving out words of wisdom.  Sorry, no cute wise green gecko but we do have cute green frogs but no words of wisdom pouring out them either.

Soon they settled down to listen to a bush missionary lady tell of how God moved in her life around their age to get her to this land of not so cute geckeo and green frogs.  These young women along with the men who came worked, sacrifice and were heavenly provided the funds to come help on some building project on our support center.

They hit the ground with an abundance of  energy even 20 hours on a plane could not dampen ready to tackle the tasks set before them.  We marveled at the speed they were getting things done...looking forward to the extra that were planned for them.  Trips into town to shop in the market, swimming in the ocean,  a traditional mu mu and sing sing in a nearby village.

The adventure got kicked up a notch when the village invited them to watch the pig begin prepared (killed ), help peel all the local veggies to join the pig  in a prepared place in the ground.  A huge earthen crock pot surrounded by leaves, topped with dirt and set to simmer.   Finally the next day it was time for the unveiling of that cooked  pig.  About a hundred people came to mostly just watch this group of 20 some Americans enjoy a traditional party (mu mu...sing sing.  All too soon it was over, the group came back wearing the gift given to them made out of bush material.  Their hearts had been stirred, some voicing how they could live down at the village.

Everybody who comes on a round trip ticket leaves usually very stirred  but easily slipped into the thinking that the mission field is somewhere over seas not on their home front.   So my heart was to give these girl a gift to remind them of their time in PNG.  A one kina coin ( about 45 cents) has a hole in the middle so I set about making simple necklaces for each girl.  After I gave them out I challenged them to use is not only to tell of the adventure they had been on but take their stories one step farther and tell of God's work in their heart and find out if the hearers knows the creator of the gecko and green frogs.  The battle for souls are won or lost right where ever  the gospel is presented., anywhere in the world.

What I seen as I watched their faces singing, How Great Thou Art that night was young women already with some young wisdom eager to learn, be used, future wise hearted women. A blessing to have just a small touch in their lives.
Posted by Wise Hearted at 8:36 PM