Recently our grown daughter, Tara shared how she  was learning again not to put great store in material things.  God used her 8 year old daughter to help bring home a much needed lesson for all of us. 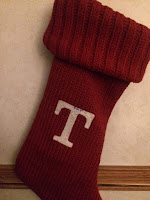 Last year before Christmas our Tara broke down and bought matching stockings for her family with the letter of their first name embroidery on them and they weren't cheap.  She told me, Mom I just wanted something that matched instead of the hodge podge of stockings, each a different color, size and age. She ignored her family teasing her mercifully since they were happy with the old ones.  Seeing those matching stockings hanging up started the Christmas season off with a warm glow for Tara. Each one was perfect.


Right after  she put them up  her 8 year old said, Mom how can you tell which T is for you, Tara and which is Dad's whose name is Tony.  That sweet 8 year old grand daughter thought, I will help them tell which is which by writing their names on them.  If you look close you will see on the top of the white T there is Tara name written in ink.  And Tony's has his name written on his also.  Ava Jo really did think she was helping her Mom and Dad.

But it sent Tara, our daughter through the roof since those  perfect matching stockings were very important to her.  As an MK, missionary kid she had to do with what ever was given to us and it did not always match which put a dream in Tara's heart. Her years as an MK  later turned into 14 years as a married women with three children in the jungles of Papua New Guinea where she once again lived with not much matching.  Honestly it's not much of a struggle when you live in a remote village where they have no stockings, one is easily contented with what ever.  But back home in the states where just about everyone putting up Christmas decoration galore usually with a theme it's very tempting to forget what is important.  It took her saying she was sorry to Ava Jo to restore  an important  relationship.

By the time she told me about it she was able to laugh about  the error of her thinking.   Some lessons must be learned more than once and the ones that concern "stuff", no matter what that stuff is have everything to do with our hearts.  The week Tara told me this story was a week into the worst fires in California history.  So many lost all their "stuff", everything except their lives.  We put such store on what we own as if we really own it, not realizing it owns us and that comes home when it's gone or destroyed in some way.

I understand Tara's battle.  Even when we have stuff the push to buy more and more seems to leave us senseless and our checking accounts empty.  I know she will not go out and buy more to replace the two stocking Ava Jo wrote on.  In fact they will be the reminders to not put much store into  "stuff " here, someone could write on it.  😊