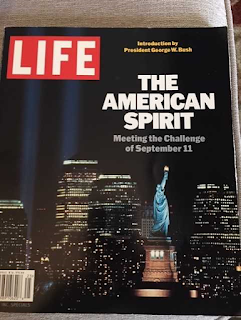 Change is in the wind at our house, I am moving the bedroom around to utilize the space better.  In the process I am reducing books on a shelf and came across this magazine that still causes tears to flow as I looked at pictures, read stories.

One comment by Rev. Calvin Butts especially stirred my heart.  He said this to the people of his church.

"When you go to work, you be the tower. You stand tall."

I personally think we have come a long way in protecting our country since then. Of course there is always more that can be done unless our leaders get their hands tied by people who have another agenda besides  protecting the people of this country.

Truly I am not trying to make a political statement because I made mine the day I voted and I don't mind telling you my vote was not for Hillary.  In fact I try hard to not get political on any social media even though I have strong opinions on a lot of issues.

Why?  Well that is the easiest question for me to answer. Life is in Christ and not in any political figure even though they may be a bold Christian like our vice president, they did not die on the cross for me.  Watching the reactions of so many after the elections  when
Trump won was like watching a bunch of little kids being told you cannot do that.  Actually we just watch it for fun at times to get a good laugh and remind ourselves how foolish we all can be when we don't get our way.

You see I feel exactly like Rev. Butts about standing tall for Jesus.  I would only change a few words of his comment to fit mine.

When you go to work, or go anywhere, you be Jesus. you stand tall for Him so people always know He is your life.


Often things happen to us that we don't deserve. My mother use to say from her frail wheelchair bound heart, why does God let little children be killed, they don't deserve to die.  She would always add, why does He leave me here,  and take them.  Some questions there are no fair answers.  All I know for sure is, unfair will stop someday.  The enemy of our soul, the same enemy who was behind the Twin Towers coming down, the same enemy who tries his hardest to bring us Christians down will be put down forever.