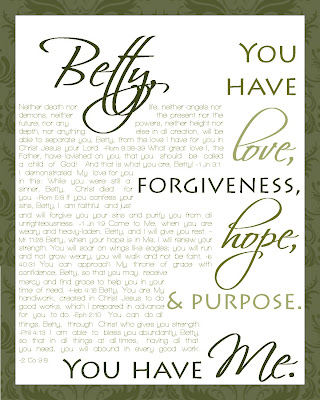 This personalize scripture art created by Stephanie Spencer over at Everyday Awe... fits what I read this morning in a book by Joni Eareckson Tada titled, "Glorious Intruder." The chapter was on Significance, Believing God Will Use Me.
What I want to do is post the whole chapter since God has gifted Joni to write something so life changing  I know it will touch your heart.

Every morning Connie opens Diane's bedroom door to begin the long routine of exercising and bathing her severely paralyzed friend.
The sun's rays slant through the blinds, washing the room in a soft, golden glow.  The folds of the covers haven't even moved since Connie pulled them up around Diane the night before.  Yet she can tell her friend has been awake for awhile.
"Are you ready to get up yet?"
"No...not yet," comes a weak reply from under the covers.
Connie sighs, smiles, and clicks shut the door.
The story is the same each dawn of every new day at Connie and Diane apartment.  The routine rarely changes.  Sunrise stretches into mid-morning by the time Diane is ready to sit up in her wheel-chair.  But those long hours in bed are significance. In her quiet sanctuary, Diane turns her head slightly on the pillow toward the cork board on the wall.  Her eyes scan each thumb-tacked card and list.  Each photo. Each torn piece of paper carefully pinned in a row.  The stillness is broken as Diane begins to murmur.  She is praying.
Some would look at Diane--stiff and motionless--and shake their heads.  She has to be fed everything, pushed everywhere.  The creeping limitations of multiple sclerosis encroach further each year. Her fingers are curled and rigid.  Her voice is barely a whisper.  People might look at her and say, "What a same. Her life has no meaning. She can't really do anything. "
But Diane is confident, convinced her life is significant.  Her labor of prayer counts.
She moves mountains that block the paths of missionaries.
She helps open the eyes of the spiritually blind in southeast Asia.
She pushes back the kingdom of darkness that blackens the alleys and streets of the gangs in east L.A.
She aids homeless mothers...single parents...abused children...despondent teenagers...handicapped boys...and dying and forgotten old people in the nursing home down the street where she lives.
Diane is on the front lines, advancing the gospel of Christ, holding up weak saints, inspiring doubting believers, energizing other prayer warriors, and delighting her Lord and Savior.
This meek and quiet woman sees her place in the world: it doesn't matter that others may not recogize her signifiance in the grand scheme of things.  In fact, she's not unlike Emily in Our Town who signs her address as:

In the mind of God...that's about as significant as you can get, whether you sit at a typewriter, behind a wheel of a  bus, at a desk in a classroom, in a chair by your kitchen table...or lay in a bed and pray.  Your life is hidden with Christ. You enrick His inheritance. You are His ambassador.  In Him your life has depth and meaning and purpose, no matter what you do.
Someone has said, "The point of this life...is to become the peson God can love perfectly, to satisfy His thirst to love.  Being counts more than doing, the singer more than the song. We had better stop looking for escape hatches, for this our hatchery."
It's my prayer that in these chapters, you will discover the signifiance that has been your all along as a Child of the King. You may not be able to know the meaning of every event, but you can know that every event is meaningful.
And you are significant.  (quote from: Joni Eareckson Tada)

This for me is a keeper, one to print, paste near my computer, put in my bible, share with other, re-read countless times for what  God said to me was...Betty you are significant...I love you...I want to use you...You are mine,  bought and paid for.

You too are significant.