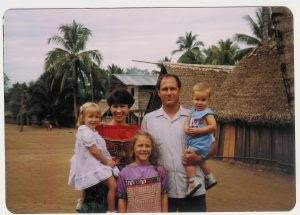 My first husband, Rick Tenenoff and our co-workers Mark Rich and Dave Mankins were kidnapped and never seen by us again. There was sporadic contact with the guerilla rebels the first year and many efforts to obtain their release over the ensuing 8 years. However, these efforts were unsuccessful and their memorial service was in October, 2001.
Many have asked me, ‘How is the Kuna Church doing these days?’ In answer to that I think of I Corinthians 3:6. We missionaries planted the seed of God’s provision of eternal salvation through the death, burial and resurrection of His son Jesus. After the kidnapping, some Kuna believers took on the task of watering the seeds in the fertile Kuna soil. A Kuna couple from a different village moved to Pucuro and continued teaching the Word. It hasn’t been an easy time, but it has been profitable in that there are many Kuna now trusting in the finished work of Christ. 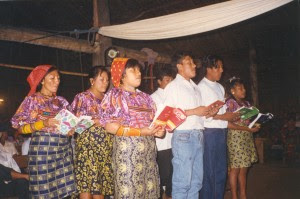 Today, 20 years later there are many Kuna believers trusting in the finished work of Christ.
The complete Kuna Bible will be revised and printed in the near future. Kuna Literacy classes are on the rise. Things are happening! It is so exciting to hear of the maturing Kuna church not only in Pucuro, but on the coastline and along the Panama/Colombia border. Again, God is faithful!
Please pray for the upcoming Kuna literacy classes.
Please pray for the translation team as they fine tune the final draft of the Kuna Bible.
Please pray for Vic and me as we serve and teach at the Missionary Training Center.
Thank you for your prayers for us and the Kuna church!
Patti (and Vic too)
*For a book about the kidnapping of Rick Tenenoff, Mark Rich and Dave Mankins see: Hostage
**For a testimony from one of the hostage-takers who became a believer, see this post from Mark Rich’s parents: Forgiven
***For more updates about the Kuna people see: Kuna People Group Mission News

(We were serving in Bolivia when this happen.  A couple years later two more  New Tribes missionary men were taken in Columbia and killed in  a gun battle.  A few years after a New Tribes pilot serving in the Phillipines took his wife, Gracia to a seaside resort for their anniversary.  They along with others were taken captive their first night at the resort.  After a year of captivity Gracia's husband, Martin was killed during the attempted recuse.  Gracia though shot survived and  has a book out about their ordeal,  In The Presence Of Mine Enemy.   I read somewhere the battle is the bloodiest at the front.  These precious missionaries who give up the comforts of home understand that, yet they dare to say, I'll go, I'll take the light of the glorious gospel to in the remote places.  Please take to heart the plea from Vic and Patti to pray for their request.  I pray you are having a part of the gospel going out beyond your world.  Those who have chosen to be boots on the ground know the danger, understand the cost and would gladly say to you, it is worth it.
I know I always say this to you when I post on mission, but I truely mean it.  I do not post to get you to give money even though it takes it to go.  All New Tribes missioinaries live by faith, over seas and those of us serving in the states.  I do post to make us all aware there is a world outside of "us".   Jesus made it very clear that we are to go and give the gospel out...the location He will direct.

I  posted this on my fb and all ready someone told me they stuggling with this  testemony.   Does reading this cause you to struggle?  If so, ,why?
Posted by Wise Hearted at 10:04 AM