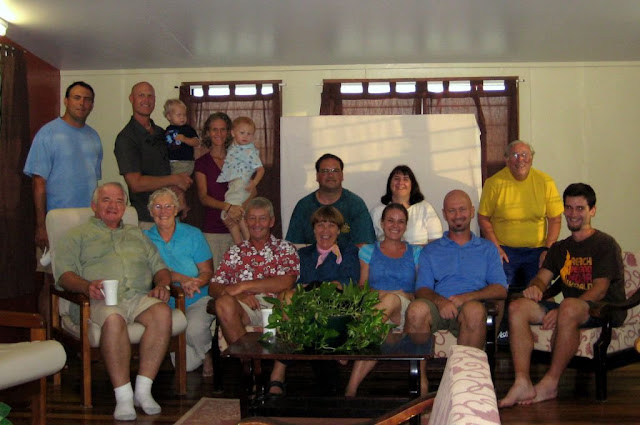 I love the popup pictures from the past. 2010 was a great year because of all those people in the picture. We were the Madang team that ministered on the Support Center 20 miles outside of Madang, Papua New Guinea located right on the Bismarck Sea.

Our job was to keep the missionaries out in the remote villages supplied with what ever they needed. That young man on the left was single then, now married with three, maybe four children back learning an un written language in a village so they can present the gospel. The couple next to him were on an island with an active volcano learning a new language, but eventually had to come home to take care of his parents. Next to them is a couple from England, were in a village for years, finished up the translation of the Bible while helping us on the base. We are next to them, Ace was the finance administrator, leadership, I fried chicken and took care of housing.

Top level, behind us was the young man in blue t shirt was a jack of all trades, he did whatever needed done plus in his space time built guitars, learned different language. the couple with the cute kids came as singles. He built the houses on the base. They married, actually had three children while living there. Now they reside in the states, with I think 6 children, and he is still a builder. The next couple serves in Columbia now. The gentleman in the yellow shirt worked on another island, translated the bible into the village language and then after many years came to the Madang base to help it get started and finally retired.

I wanted to tell you all this and actually wanted to write about 100 times more about these people who are just like you. Normal people going about life , heard there were some people who needed to hear the gospel and said yes to it. Was it a call, not really, it is a command, go into all the world, this was the part of the world He picked for all of us. Some of us served in other countries also and still continue to serve Him in the states, England, where ever our feet are. That's what missionaries do, serve Him where ever their feet walk, tell others in what ever languages we can speak about how thankful we are for God sending His Son to die for our sin.