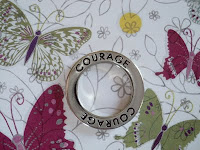 This little silver pendant ring with "courage" etched on it has been used almost daily as a reminder of my ever needy soul for courage.  It's caused me to look on purpose for Women who need a touch of courage as they walk through this worlds with all its trials.

Recently in California a lady clerk in a grocery store ask me what my pendant said.  My heart raced for I have been waiting for someone to ask me.  After I said, courage, she replied, is that the same as "guts", I smiled and said yeah I think it could be called that. She then went on to say, well with the way the world is going we are going to needs some guts...I couldn't agree more even though I don't think she and I were thinking the same thing.  Her next customer was pushing her groceries up to the line so I knew I might be able to get one more word in for Him.  I took a deep breathe and said Mam I am a Christian and all that is going on does not concern me much for I know the Lord and He will give courage for whatever is to come. I could tell she would have talked more but work called her so I gave a huge thank you and left this dear soul in God's hand, I had planted, someone else will water.

For several years I have been collecting courageous wise hearted friends.  Friends I know well, some I only met once, a few I have never met.   It all started when I bought my first courage ring and then went back to buy enough for all the women in my Sunday school class.  Being an older women class I knew they would appreciate the burden God laid on my heart to give out courage.  Over half these ladies were widows so they understood the courage it takes to get back into life after losing a loved one. A couple women live with unsaved husbands, some have to live with  their children after being on their own for so long or their children had to live with them. One had a son in prison, another had family member with cancer, several had chronic ailments of their own, physical pain they bore daily, heartache after heart ache walked into that Sunday school class weekly.    But the challenge to them as I put the courage circle chain on their necks was to look around the church and find a younger women, maybe even a teen who needed a courage touch.  Then if God so leads, give them the courage ring and I would to the best of my ability get them another one or give them the web site to order their own.

The first one to do so gave it to their grand daughter who was struggling with school.  I begin to pass out these courage rings to other friends, in the states and even overseas with the same exhortation.  Next I heard from another mother who daughter needed a touch of courage, one of our missionaries in the bush gave hers to a tribal lady struggling. Another mother whose daughter had a break down parted with hers and put it around that sweet frail daughter neck.  A missionary laid aside by a debilitation illness must leave their love of their life, missions and come home.  several young missionary women who are just starting out their journey overseas.  A homeless women living in her car brought to the Lord by some courageous wise hearted women.  There is now a band of sisters all over the world who wear the "courage circle" as a reminder to take courage and in a fallen sinful world look for some one to encourage.

The word courage is in both discourage and encourage and we are the only ones who can chose which to do.

Often the real test of courage is not to die, but to live. Hope has two beautiful daughters - their names are anger and courage; anger at the way things are, and courage to see that they do not remain the way they are. Jesus said, I tell you the truth, if you have faith as small as a mustard seed, you can say to this mountain, 'Move from here to there' and it will move.Courage is resistance to fear; mastery of fear - not absence of fear.
Mark Twain

My little courage pendant  that hangs from a chain near my heart has helped me conquer my fear of flying.  Given me words when I thought none would come, shut my mouth when too many words spilled out.  Courage has helped me follow my spirit filled husband who has taken me all over the world to serve the Lord.  Now I find at my age, 67 a need for courage still for my body is getting frailer as I type.  Nothing stops time.  I have to wonder in the still nights when I cannot sleep, will that courage be there to be old, you know really old, everyone tells me 67 is not old so there must be older.  My mother lives in a nursing home and at age 87 I see courage every time I get to visit her.  I sense her resistant to give into the dreary life that comes with a nursing home living.  I hear her voice as she goes to the singing, helps the staff stuff Easter eggs for the children egg hunt.  I watch her struggle as the two nurses it takes to get her out of her wheel chair to go anything, she takes courage hand every day.  She may be the bravest women I know right now.
Acceptance takes more courage then action.
God give me courage
This is a re-post with a few changes to fit today for you see...I still need courage.  I wrote it in 2007, we were still serving in the country of Papua New Guinea.  My study on "courage" has been on going and I am always finding little gems that open up this action of valor.
Some I found recently come from the minds of children...pure wisdom.
Courage can be standing up to a bully or retraining the urge to punch out somebody's light.  REAL COURAGE REQUIRES WISDOM. Chelsea, age 6
One more....Without courage, "You wont' have as much fun because you will always be scared of almost everything," says Alex, age 7.
Have you heard a good quote on "courage".  Drop it in my comment box, it will give me courage.

(Since I posted this, my mother has went to glory. I am 74 instead of 67, lots of water has pasted under this old bridge. It's ok, to repost a repost...there is new insight as I read what was happening in my life in 2007. So much to be thankful for comes to mind as I re-read this. Don't forget to share a, "courage quote" in your comment if you have one. Blessings.