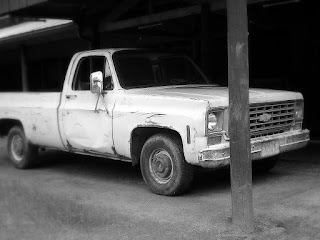 I know Easter is right around the corner and here I am writing about truck exhaust. If you’ll stay with me on this, there is an Easter story in my post.


The smell hit me before I seen where it was coming from. Memories washed over me and for a instant I was back in my teen years, riding the country roads of southern Illinois. When I looked up, there it sit, an old white Chevrolet truck, rusted all over, paint missing in quite a few place. You could tell it had seen its better days. It was running with no one in it, as if the person only meant to run into Walmart for just one thing and knew if he turned it off it might not start again. Besides who would steal something so beat up and smelling so bad.
But, it was the smell that got me! Not just because it was a truck because I have smelled it on old cars too. You know, gasoline, exhaust from too loud mufflers, a dark gray smoke puffing from it’s behind. Shuddering at times like it was going to quit running but never did. It needed a tune up job for sure and I am betting the man who drove it knew, but why spend money on something that still runs? I would also bet it was a man who drove it, not a women, it smelled like a man’s truck, maybe a work truck.

When I was a teen I had a few of those kind of trucks or car pull up in front of my house full of friends to pick me up. You could hear them coming a half mile away. The friends that I had did not drive new trucks or new cars. It was young men who worked at gas stations, drove a tractor, baled hay, and some worked in the oil field, like my boyfriend who became my husband. Most of them could work on their own cars and trucks too, a dirty job but saved money and taught them to fix things.


I know this sounds crazy but I love that smell of gasoline, and the sound of a loud muffler. Here”s the thing, I don’t remember thinking back then it was cool, it was just a fact of life. But that smell reminds me of men, men who knew how to take a car tool and change a tire, fix a carbonator, or change a muffler, or put a louder one on. Men who knew how to work, who would work two jobs if that’s what it took to get a car, even an old one that needed some work. The people I ran with never thought about asking their parents to buy them a car or truck.


My oldest Grandson is one of those men. He has always known his folks could not buy him any kind of car. So, he worked hard all through his junior and senior years of high school and saved his money for one. His Grandpa started looking for something that an 18 year old man would like. A truck would be nice but then Ace found this black older jeep that you could take the top off and runs those country dirt roads if you wanted to.


As soon as he graduated from high school he got a job for a company that paved parking lots. Dirty hot work but it paid pretty good and there was tons of over time. It was nothing for him to work 16 hours seven days a week. First thing he did to his jeep was put the loudest radio speakers and mufflers that you can hear a mile away. All the girls wanted to ride in it and all the boys wanted to drive it.


Right now he is in his first year of University of North Dakota and his job is not only dirty , but a cold one, snow removal. We are all thankful he is not afraid to work and strives to pay his own way. He does not mind that his jeep needs a paint job, drink gas faster then one can drink a cold coke, it’s his, paid for by sweat and dirt and a little help from his Grandpa.


Are you wondering where I am going with this since I told you the Easter story was in the exhaust?  When Jesus came to earth as a baby, through the body of a women, took on humanity He took on exhaust. If He had come during this time span I don’t think he would have drove a new truck or car, I mean a donkey was his mode of travel but mostly His feet took Him everywhere He went. I guess what I want to say is, I love the humanity in our Savior. It causes my heart to swell with love for Him. Makes me want to do everything He ask of me. He worked all His life, learned a skill as a carpenter, sit underneath the teaching of the Word, He was a man’s man. He was not high and mighty and prideful like the priest with their fine clothing and jewelry.


For those that stood near when He carried the cross up Calvary they knew He was in pain and torment, yet He took it like a man, a flesh and blood man, He fell under the weight of the cross so the human part of Him did not have superman strength. He was exhausted, beat to the bone, and the part I love the best of this story is, He did it for us.